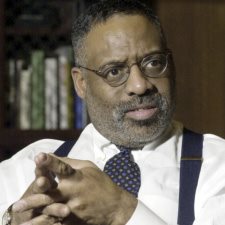 White, began his political career early on during his college years at Ohio State University, when he protested against the discriminatory policies of the Columbus public bus system and was subsequently arrested. White then ran the following year for Student Union President and won, becoming the college’s first black student body leader. He earned a Bachelor of Arts degree in 1973 and a Master of Public Administration degree in 1974.After college, White returned to Cleveland. He served from 1976 to 1977 as an administrative assistant to the Cleveland City Council and then served as city councilman from the Glenville area from 1978 to 1984. During his time on the City Council, White became a prominent protégé of Councilman George L. Forbes. White then represented the area’s 21st District in the Ohio Senate, serving as a Democratic assistant minority whip.