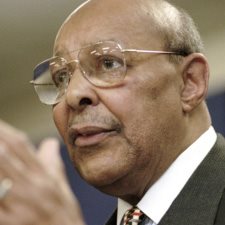 Louis Stokes (February 23, 1925 – August 18, 2015) was an attorney and politician from Cleveland, Ohio. He served 15 terms in the United States House of Representatives – representing the east side of Cleveland – and was the first black congressman elected in the state of Ohio. He was one of the Cold War-era chairmen of the House Intelligence Committee, headed the Congressional Black Caucus, and was the first black on the House Appropriations Committee.