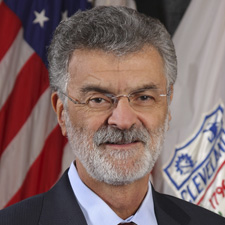 Jackson is the son of an African-American father and an Italian-American mother. Jackson grew up in the Kinsman and Central neighborhoods. After graduating from Max S. Hayes High School, Jackson served in the United States Army. After his discharge, Jackson attended Cuyahoga Community College where he earned an associate degree He later attended Cleveland State University (CSU), earning a bachelor’s degree in Urban Studies and History and a master’s degree in Urban Affairs. He worked while putting himself through law school at CSU’s Cleveland-Marshall College of Law.

Jackson entered politics with the influence of former Cleveland Councilman Lonnie L. Burten. He passed the Ohio bar exam and started his legal career as an assistant city prosecutor. In 1989, Jackson won a seat on the Cleveland City Council for Ward 5. As Councilman, Jackson spearheaded efforts to bring in approximately a half billion dollars of community investments, working to clean up and stabilize his ward.

He fought for the redevelopment of Arbor Park Place, the construction of the only Home Ownership Zone in the city, and worked with the Cuyahoga Metropolitan Housing Authority (CMHA) as it began to rebuild its estates. Jackson became an active critic of then-Mayor Michael R. White, who had vowed in his campaign to clean up neighborhoods but had instead dedicated the bulk of his tenure to downtown development. Jackson’s progress in Ward 5 aided his election to Council President in 2001, succeeding Michael D. Polensek.