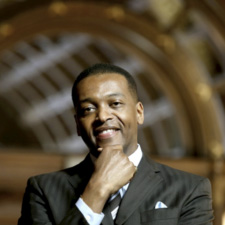 Randell McShepard was elected vice president – public affairs in October 2007. He is primarily responsible for coordinating external and governmental affairs for the company. His duties also include managing the corporate philanthropy program and facilitating corporate purchasing initiatives. Mr. McShepard began his career at RPM in 2001 when he joined the company as director of community affairs. He previously served as executive director of City Year Cleveland, assistant director of administration and program development for the Cleveland Bicentennial Commission and supervisor of training services for Vocational Guidance Services in Cleveland. Mr. McShepard is very active in the Cleveland community, serving as a trustee for Baldwin-Wallace University, St. Vincent Charity Medical Center and the George Gund Foundation.

His professional affiliations include the Public Affairs Committee for the National Association of Manufacturers.  He is also the co-founder and Chairman of Policy Bridge, a public policy think tank serving the Northeast Ohio region. Mr. McShepard holds a bachelor’s degree in psychology and communications from Baldwin-Wallace College and a master’s degree in urban studies from Cleveland State University. He is a graduate of Leadership Cleveland and a distinguished alumnus of Cleveland State University.

He and his wife, Gail, reside in Beachwood, Ohio with their three children.