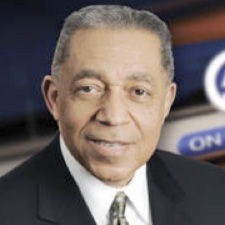 Raised in Cleveland’s Glenville area, and a graduate of Glenville High School on the city’s east side, Bibb’s broadcasting career began during his student days at Bowling Green State University (BGSU). Following graduation, he worked as a newspaper reporter at The Plain Dealer. After a year at WTOL-TV (Toledo), he accepted a news position at WCMH-TV in Columbus. Prior to joining WEWS-TV, Bibb worked at WKYC-TV as the weekend News Anchor and News Reporter. In 1986, he became Primary News Anchor for the Monday through Friday newscasts. Leon Bibb anchors the noon newscast at WEWS-TV, as well as hosting a Sunday morning show named Kaleidoscope, which focuses on urban issues in Cleveland. In the early 2000s, Bibb did a series called Our Hometown, where he focused on a historical sites in the Cleveland area. He is known to take a camera operator to talk about a story in his own perspective, and such stories are now featured on WEWS under the title of “My Ohio”.