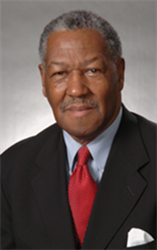 Mr. Lewis was one of the first African Americans in the City to break through the banking industry’s “Ivory Tower” to become a Senior Vice President, head of the Private Banking Department and Chairman of a Major Financial Organization’s Contributions Committee. Likewise, through his extensive volunteerism, he has served on numerous boards where he was the first and only African-American to serve. He has made it a personal goal to assist these organizations in diversifying their boards & staff. He distinguished himself through his career by unselfishly serving as the Community Reinvestment Act Officer at Bank One in Cleveland and held the bank’s Community Development position as a Senior Vice President. Bracy provided collaborative efforts in lending and equity financing for historic rehabilitation, community, and economic development, and revitalization in the Greater Cleveland Area for the betterment of the community. He has always been much more than a banker, by serving on boards and volunteering to “give back” to the community, usually without compensation. During his tenure at Bank One, Mr. Lewis was named to the Glenville High School and Glenville Legends and Legacy Halls of Fame honoring citizens of accomplishment in the community who have provided an excellent example for those to follow.

He was given the “Ohio Humanitarian Award for Leadership” in 1993, which was bestowed upon him by then Governor George Voinovich. Mr. Lewis received the “Community Development Award” from Amistad Development Corporation. Also one of the ten finalists in 1994 for the “Points of Life Award” which was President William Clinton’s Volunteer Action Award for remarkable individuals who have given themselves to an exemplary level and made a difference in their community. Formerly, Mr. Lewis served simultaneously as President of the Cleveland Restoration Society and Chairman of the Cuyahoga Metropolitan Housing Authority’s Board of Commissioners and served as President of Karamu House Theatre. Mr. Lewis actively participated in Lutheran Housing Corporation, Living in Cleveland Center, Huron Hospital, Greater Cleveland Growth Association’s Government Affairs Committee, Consumer Credit Counseling Service, Health Care for the Homeless (aka Care Alliance), Senior Outreach Center, Fenn College Foundation (aka Cleveland State University), AAA Ohio Motorists Association, Cleveland Music School Settlement, Trinity Cathedral Music and Performing Arts Committee, The Mandel School of Applied Social Sciences Visitors Committee and Chairman of the Regional Board of Northeast Ohio Local Initiatives Support Corporation (LISC).

Upon his retirement in 1996, then-Mayor Michael R. White presented the “The Key to the City of Cleveland” and named a City Park in Mr. Bracy Lewis’s honor in recognition of his service to the community through his role as banker and his service on numerous boards. This was a first in the City. JP Morgan Chase Bank (aka Bank One) retained him as a consultant in the capacity of Director of Governmental Affairs for over ten years due to his reputation and skill sets. Mr. Lewis is still remains involved in the banking community and is on the Regional Board at Huntington National Bank. Bracy was chosen by Mayor Michael R. White to serve as Chairman of the Cuyahoga Metropolitan Housing Authority’s Board of Commissioners in early 1998. Mr. Lewis also volunteers at the national level for The National Trust for Historic Preservation in Washington DC and was given an award for his indisputable leadership abilities. Mr. Lewis even donated his time to tutor children in the Cleveland Public School System in music appreciation, math, and reading. Currently, volunteers for Golden Age Centers and the City Club of the Cleveland Foundation.