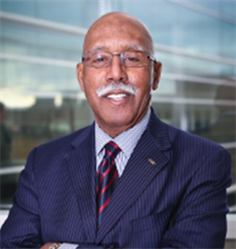 Dr. Julian M. Earls is the retired Director of the National Aeronautics and Space Administration’s Glenn Research Center at Lewis Field in Cleveland, Ohio where he served from October 2003 until December 2005. Previously, he served as Glenn’s Deputy Director. As Director, Dr. Earls was responsible for planning, organizing and directing the activities required to accomplish the missions assigned to the Center.

He is also a graduate of the Harvard Business School Program for Management Development. Since the beginning of his career with NASA in 1965 at the Lewis Research Center, renamed to the Glenn Research Center in 1999, Dr. Earls has written 28 publications for technical and educational journals. He wrote the first health physics guides used at NASA. He has been a Distinguished Honors Visiting Professor at numerous universities throughout the Nation. On two occasions, he has been awarded NASA medals for exceptional achievement and outstanding leadership and has received the Presidential Rank Award of Meritorious Executive.