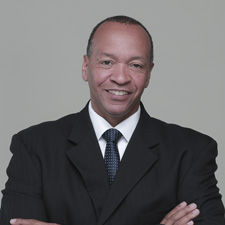 In 1983, Dr. Modlin graduated from Northwestern University in Evanston, Ill., with a degree in chemistry. He received his medical school education at Northwestern University Medical School in Chicago, graduating in 1987. He then moved to New York City, where he completed a six-year residency in urological surgery at New York University in 1993. He came to Cleveland in 1993, where he completed a three-year fellowship in basic science transplant immunology and clinical renovascular and renal transplantation surgery. In 1996, he joined the Staff of Cleveland Clinic’s Urological Institute with a joint staff appointment within the Transplant Center. He has authored scientific publications and presented scientific research at national meetings.

Dr. Modlin is not only the sole African American transplant surgeon in Northeastern Ohio, but he represents one of only 17 African American transplant surgeons in the entire United States. A special area of interest of Dr. Modlin is the issue of healthcare disparities experienced by minority patients in the United States. Minority patients suffer a disproportionate burden of disease in many areas, such as prostate cancer, cardiovascular disease, hypertension, diabetes and need for kidney transplantation. To this end, Dr. Modlin has developed a dedicated Minority Men’s Health Center and Center for Health Equity at Cleveland Clinic. The center conducts dedicated research into elimination of minority healthcare disparities and provides community outreach as well as direct patient care and public education to minority patients.

He also serves as an elected member of the Northwestern University Medical School Alumni National Board. He is Chair of the Cleveland NAACP Health Committee and Chairs the 100 Black Men of Greater Cleveland Health Committee. Dr. Modlin has held positions on the United Network of Organ Sharing Minority Affairs Committee and was the UNOS Representative from the National Medical Association. Other professional highlights include receiving the Cleveland Greater Cleveland Partnership MLK Community Service Award in 2007, the MOTTEP Man of the Year Award in 2000 and named one of Cleveland’s 100 Most Influential by the Call & Post newspaper and in 2011 he was listed as one of America’s Top 21 Outstanding Black Doctors. On the home front, he is married and is the father of four children.